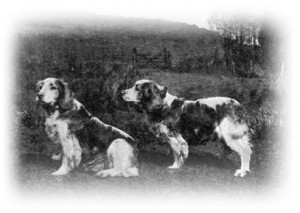 This breed is a pure and ancient origin. It comes from England from a part of the Welsh. The breed was bred to hunt rabbits and birds for the hunters hunting with falcons in the past, nowadays with firearms. 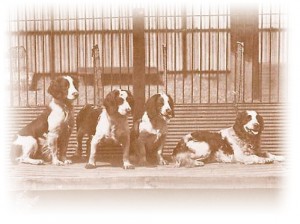 World War I had a destructive effect on breeding base, which was almost destroyed. A lot of dogs were killed  because of the fear of starvation. World War II had also huge effect on decreasing quantity of dogs. Thanks to small number of dedicated and enthusiastic people for this breed it has been maintained until today despite these hard times.

František Liml was the first breeder of Welsh Springer Spaniel in Bohemia. He imported his first dog – Hinckeldeyn´s Aara from breeder Harry Hinckeldeyn- from Germany in 1963. The next year Mr Liml succeeded to import adult female Bright Poppet of Hearts and he founded his own kennel „ Grunda“.  The puppies were born under this name from joining of these two first Welsh Springer Spaniels in our country .

Other enthusiasts got involved in the breeding this breed during 1970´s and 1980ś and they imported dogs from Germany,Holland , France and Sweden. This trend continued in 1990ś and nowadays there are 5.000 individuals of this breed registered in stud book. The Czech breeders are working quite often on their base, some of them thankfully import male and female especially from Finland and Holland. Some breeders decide to go for matting abroad very often and it is very important for  the Czech breeding to get other unrelated blood. 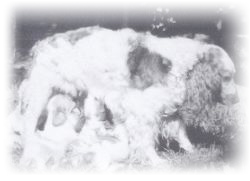 Welsh Springer Spaniel nowadays is beeing bred  very successfully especially in Europe, USA, Australia and New Zealand. Its popularity has been increased and this breed is getting to be very appreciated. The dog owners have got possibility for comparing and they recognize that this breed is surpassing some other very popular breeds with its intelligence, adaptability, welcoming nature and excellent health disposition. As for the health of this breed it is one of the few  without any common diseases of other breeds. In the term of health of Welsh Springer Spaniel the hips and eyes are very carefully monitored because it is one of the most important conditions for fulfillment of breeding in our country. In foreign countries also thyroid function, elbow joints and heart are sometimes monitored.

Welsh Springer Spaniel is medium size breed( height on average is 46 cm of females and 48 cm of males) of symetric compact appearance with half long silky texture coat of unique red white colour. Keeping the hair is easier than of his  „cousin“ English Springer Spaniel. 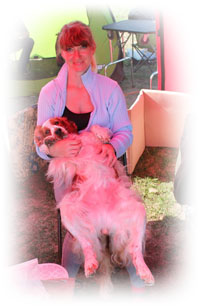 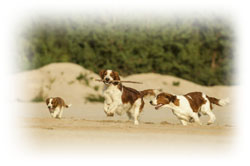 Welsh Springer Spaniel is affectionate friendly dog with excellent intelligence, individuality and good initiative. He is sometimes a little bit impulsive and headstrong, which can be used however as an advantage. Telling the truth he is relentless  worker and faithful friend, good companion for sport and fun .This breed fits into the families with children as well as for people enjoying long walkings and surely as excellent hunting dog for the hunters. It may dwell in the house, in a flat or in the garden, but everywhere in adequate conditions. It means regularly walking dogs, giving them chance for running or spending the time in the garden let them to be with you in contact, devote time for them, they will be happy and very grateful for it. Welsh Springer Spaniels have got good positive relationship to other dogs as well. They are wonderful, beautiful, beloved and admired dogs.